Love-locks are exactly what the title suggests: padlocks purchased and employed worldwide as statements of romantic commitment. Typically a couple (often tourists), having inscribed their names/initials on a padlock, will attach it to the railings of a bridge or other structure, and will symbolically deposit the key into the river below. It’s said that if the couple ever wish to separate, they have to retrieve the key from the water and unlock the love-lock.

The origins of this practice are unclear; it’s documented in Pécs, Hungary, in the 1980s, but didn’t gain popularity until the publication of Italian writer Federico Moccia’s 2006 romantic novel Ho voglia di te (I Want You), in which a character attaches a padlock to the Ponte Milvio bridge in Rome. The subsequent dissemination of this practice was rapid and geographically unbound, with love-lock accumulations emerging in locations as distant and varied as Paris and Taiwan; New York and Seoul; Melbourne and Moscow. 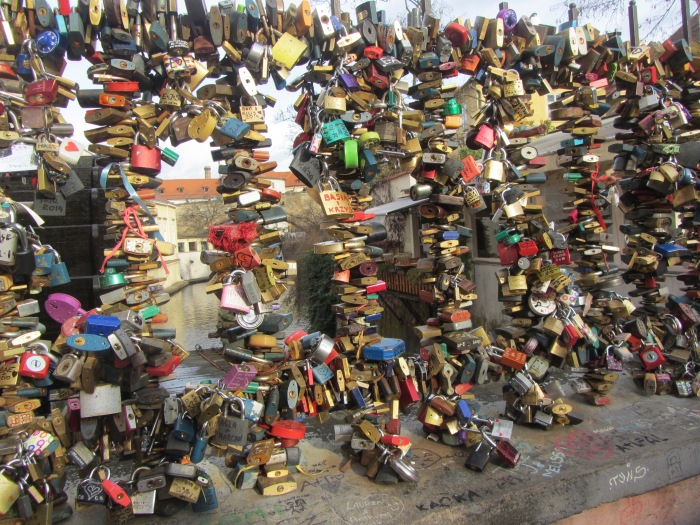 Love-lock assemblages raise questions about, and shed light on, a multitude of issues, but there are three that particularly stand out to me as an archaeologist:

Firstly, what do they reveal about values-based cultural heritage? Not everybody loves love-locks. Jonathan Jones, writing for the Guardian (2015), tears the custom apart, declaring that cities worldwide are suffering from a ‘plague of padlocks’ and accusing the depositors of vandalising historic monuments and ‘scarring great cityscapes’. Whilst Jones’ tirade may seem a tad excessive, there have been negative consequences of the love-lock custom: you’ll probably have read about a railing on Paris’ Pont des Arts collapsing under the weight of love-locks in June 2014. This incited a global cull of accumulations, with city authorities removing love-locks in Paris, Melbourne and New York, while Florence went one step further and criminalised the custom, threatening to fine love-lock depositors. However, not all cities have denounced the custom – whilst it’s tolerated in cities such as Prague and Amsterdam, it’s actively encouraged in Verona, Pécs, and Moscow, where metal structures have been erected for the sole purpose of accommodating love-locks. So are love-locks ritual deposits or destructive vandalism? It seems that they can be either, depending upon who you ask – thus exposing the subjectivity of notions of heritage.

Secondly, what are the archaeological implications of studying assemblages? The love-lock is certainly a subject of untapped potential in contemporary archaeology. For example, a love-lock on a bridge explains the presence of a key in the water below – but as the love-locks are removed, the keys become the only remaining material evidence of the custom. How might future archaeologists interpret the thousands of keys resting on the riverbeds of the Seine, the Tiber, and New York’s East River? Without knowledge of the love-lock custom, would they still be able to determine that the deposition of keys was secondary to – and wholly dependent upon – the deposition of padlocks? Surely the love-lock custom has the potential to engender a renegotiation of enigmatic prehistoric water deposits and, indeed, other forms of offerings – I’m thinking of the 100 keys discovered at the ancient Faliscan sanctuary of Monte Li Santi-Le Rote at Narce, Italy.

Thirdly, what makes a deposit ‘votive’? Does the term ‘votive’ necessitate religiosity? Must it have a divine recipient or a preternatural function? The love-lock appears to have neither so can it still be classed as ‘votive’? The Oxford English Dictionary defines ‘votive’ as ‘Dedicated, consecrated, offered, erected, etc., in consequence of, or in fulfilment of, a vow’ and ‘Consisting in, expressive of, a vow, desire, or wish’. The love-lock is deposited as a statement of romantic commitment; the padlock is locked and the key irredeemably discarded as an assertion of – or desire for – the couple’s enduring love for each other. Is this not a form of vow? Is the love-lock, therefore, not a votive deposit by definition? If so, then the term ‘votive’ does not preclude the secular – it can apply to any object deposited in the statement of a vow or the expression of a wish. What other objects would fit this description?

One thought on “Love Locks: Votive deposits or destructive vandalism?”