Laura Aho is a doctoral student at the University of Helsinki (Finland), where she is working on a dissertation on Greek and Roman votive inscriptions. In this post she shares some aspects of her research to-date, as well as discussing some of the challenges that she has been facing.

The problem with deducing motives for votive offerings from inscriptions, is their often short, formulaic, and schematic nature. Also, the circumstances in which votive inscriptions were manufactured and compiled are often unclear, and we can’t be sure who formulated the text and designed the inscription. With stone inscriptions, there must have been several people involved, whereas with softer and more easily workable materials, like metal, wood, or clay, anyone could’ve scratched or inscribed them without needing any special skill to do so.

Stone inscriptions were most likely ordered and bought. The dedicator who order the inscription, obviously had the most say in what his offering and inscription were going to be like. But the process also included a stone carver and, in some cases, possibly a scribe to help formulate the text as we can’t be sure if the dedicator and/or the carver were always literate. If the dedicator was illiterate, he would’ve had to rely on someone else to compile the text and to check the end result. It is possible that the inscription could’ve been bought ready-made and just the name of the dedicator added on it, which was a common practise with funerary inscriptions. There could’ve also been some sort of manual of model texts used.

All this boils down to the problem of how to separate an impersonal formula from what the dedicator actually wanted to say about his/her specific circumstances. The best solution I’ve come up with so far, is to look at all the available parts of a dedication (the text and possible images attached to it, the inscribed object, and/or the votive offering itself) and hope that the sum of these parts reveals whether a specific, singular reason for the offering can be determined.

The simplest way a dedicatory inscription can identified as a part of a votive offering, is simply by the use of such words or phrases as votum, solvere, reddere, vovere, gratiam agere, ex voto, debitum, or merito in Latin, or eukhē, kharistērion, aparkhē, dekatē, or euxamenos/ē in Greek. Terms like these indicate that a votive promise was made and fulfilled. In most cases that is all there is; there is no additional information about the nature of the votive promise made. The use of these terms and the language of votive inscriptions in general, although often formulaic and schematic, differs depending on when and where it was made. Usually earlier votive inscriptions use fewer words than the later ones, and there are local favourites and variations. Different variations of formulas including the words votum, solvere, merito, libens, and/or animo can be found all over the Greco-Roman world. The abbreviation v(otum) s(olvit) l(ibens) m(erito) can be found all over the Roman empire, and it is by far the most popular one. In the areas of Gallia, Germania, Noricum, and Pannonia v(otum) s(olvit) l(ibens) l(aetus) m(erito) is the dominant formula, but it is almost non-existent in the southern parts of the empire. Same applies to v(otum) s(olvit) l(ibens) a(nimo) which is the dominant formula in the area of Hispania and North Africa, and much more infrequent in other parts of the empire. The reason for these variations and the difference in their popularity must be explained by local traditions and possibly models used by the local stone carvers.

So how is it possible to deduce further, why a votive offering was made from a short and schematic inscription? One thing that most votive inscriptions mention, is the god or goddess the votive offering was made to. Already in school, we are taught that in Greco-Roman mythology Apollo is the god of art and divination, Juno is the protector of women and childbirth, Minerva is the goddess of wisdom and the art of war, and  that Jupiter is the god of thunder and so on. This, of course, is a gross simplification of a complex belief system, and has its problems.

An inscription from Rome (CIL VI, 18) gives an example why this approach is problematic: Asclepius is considered the god of medicine and his field is often thought to be limited to the matters of health. In this particular dedication Titus Iulius Genesiacus and Caecilia Balbilla give Asclepius two candle holders as a thank-you offering for their successful bean trade (ex permissu eorum negotiationis fabariae), although Asclepius has nothing to do with beans or trading in the conventional sense. If Titus Iulius Genesiacus and Caecilia Balbilla had left out the reason for their offering, it would have been impossible to deduce, and would’ve probably been guessed as something to do with health. On the other hand, offerings to different divine personifications give often a more reliable idea of the motive in hand. There are for example offerings dedicated to Good Outcome (Bonus Eventus), Good Health (Bona Valetudo), or Safety (Tutela).

Sometimes gods’ epithets can also be helpful. They range from simple and understandable to the obscure, and are usually connected with a particular cult. When an epithet is linked to a certain cult it doesn’t give much indication why an offering was made, since all the inscriptions mention the same god with the same epithet. But then again many votive inscriptions, especially from the limes area, were dedicated to, for example, Fortuna of Returning home (Fortuna Redux), and in the case of epithets like protector (conservator), health-giving (salutaris), healing (salutifer), protector of (city)walls (polioukhos), or the one who listens (epēkoōs) the reason is indicated in the epithet.

There are, of course, also the fortunate cases where the reason is given expressis verbis. The texts were kept short for practical reasons such as the space and price of the inscription. Prepositional phrases are most commonly used; especially prepositions such as ex, ob, and pro are popular. On the other hand pre/postpositions such as causa, propter, and gratia are very rarely used. Ex is most often used with reasons affiliated with some sort of theophany, divination, or advice from a god, in phrases like ex visu, ex responso, ex monitu, or ex iussu, whereas pro and ob are often associated with health and safety, like in the phrases pro salute, pro incolumnitate, ob reditum, or ob valetudinem. Participial phrases and the ablative absolute were also used, but less frequently. There, of course, are exceptions to the “short and simple” rule: an inscription from Pergamon (Die Inschriften von Pergamon III, 145) describes a rescue from a shipwreck in 18 preserved lines (this text is sometimes attributed to Aelius Aristides). 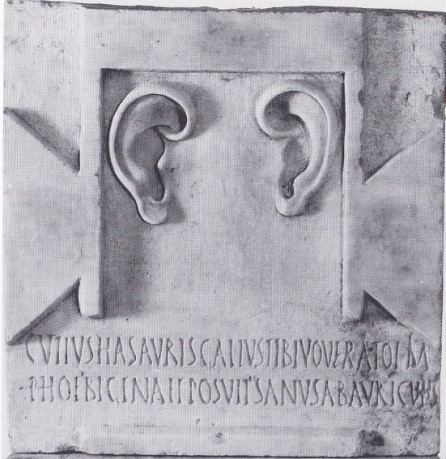 Fig. 2. A rarity, an anatomical votive with the ears and healing also mentioned in the inscription. CIL III, 7266. Photo: B. Forsén, Griechische Gliederweihungen, Epidauros.

In addition or instead of an inscription, the motive for an offering could be expressed as an image. Anatomical votives are the most prevalent example of this. They are rarely inscribed or accompanied by a text, and when they are, the text very rarely references the anatomical votive itself or healing. This might be because it would’ve been seen as repetitive, since the image already tells the story. Also images of feet were sometimes added to a votive inscriptions to signify a safe voyage and returning, but in these cases the wish for a safe journey is often also indicated in the inscription. Perhaps in these cases the picture wasn’t clear enough. Votive reliefs, on the other hand, that actually depict the event which lead to the offering, are often accompanied by a limited inscription, no inscription at all, or, as in many cases, the detached inscription has been lost.

The most common motives

The most often expressed motives for an offering are theophany, which were usually linked to either matters of health or other unexpected event when advice was needed, health, protection for self or others, success or prosperity in life, or getting justice, for example getting back stolen property or winning in court. These reasons can be divided roughly into two categories: crises and wishes/thanks for well-being and prosperity. Crises such as disease, accidents or dangerous situations usually mean spontaneous calls for help and an offering was made after the fact. Wishes for well-being, safe voyage, health or prosperity could’ve been made before or after the fact, or in some cases both. It was important, both for the dedicator and for the cult, to be able to place inscriptions and images in public. Although votive promises and subsequent offerings dealt often with private matters, the importance of making one’s name visible in a public space is always present in epigraphy. An inscribed votive offering meant getting one’s name in the public, and a fulfilled votum meant that one was in good terms with the god(s). Multitudes of votive offerings and inscribed good deeds of the god(s) were important for the cult, as can be seen from the practice of iamata (inscribed testimonies of miracle healings) in the cult of Asclepius. They gave witness to the power of the god and/or cult which then brought more worshippers and more revenue to the cult in the form of more offerings.