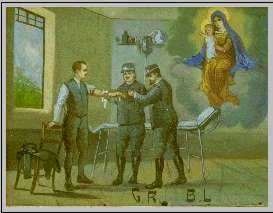 Today (4th August 2014) is the centenary of the First World War, so it seems an appropriate moment to draw attention to an online collection of Italian ex voto paintings dedicated during WWI, primarily by soldiers and their families.

The collection doesn’t include any images from 1914, so to illustrate this post I’ve chosen two tavolette which present episodes from later years of the War. Both paintings come from the town of Asti in Piemonte.

Above, a soldier wounded in the arm is treated by two colleagues, while the Madonna and Child look down from above. This one dates from 1916.

Below, a 1918 image of hope and happiness: a soldier returns home from the war, just as his mother kneels and prays to Mary.

One thought on “The First World War in Votives”