Anne-Lieke Brem, is currently a Masters student at the University of Groningen, studying both Archaeology and Cultural Geography. Her recent research focuses on the social landscape of illness and disease in ancient Greece (500-200 BC). You can read her earlier post on the biography of ancient votive reliefs as ‘things’ here.

While broadening my research, I once again read the interesting publication about anatomical votive reliefs, in which Oberhelman (2014) tries to convince us that these objects can be used as evidence for specialisation at healing centres (e.g. sanctuaries dedicated to the healing deities Asclepius and Amphiaraus), by analysing the quantity of these reliefs. But can we actually see these reliefs as evidence for specialisation? I am questioning this, since 1) we only have a small collection of what was actually there, and 2) for most of the reliefs it is impossible to date them.

I do believe that we should regard the evidence we have as a representative sample of what was actually dedicated, but only if we have a considerable number of reliefs to work with. For me, the minimum should be set at 25. What actually bothers me more is the dating of these reliefs. The healing sanctuaries where they were found operated for long periods of time (centuries in fact). By analysing all reliefs as one dataset, we are inevitably biasing our research if we do not allow ourselves to look into changes through time. Is it plausible that, from foundation to abandonment, the healing sanctuaries had the same specialisation? This consideration is something, I think, is lacking in multiple publications.

The conclusion Oberhelman was able to draw from his analysis of anatomical votive reliefs from Corinth, was that this healing sanctuary specialised in curing limbs, breasts (although the background of these votive reliefs is unknown) and also venereal diseases, since ‘Corinth was well known in antiquity as a place of prostitution and rampant sexual immorality’ (Oberhelman 2014, p.50). The votive pit at Corinth in which these reliefs were found has been dated quite convincingly to the last quarter of the 4th century BC to the last quarter of the 3rd century BC (Van Staten 1981, pp. 123–24). However, to be convincing Van Straten and Oberhelman’s datasets must be compared with the far more extensive one for the same site discussed in Laios et al. (2003, p. 542). To illustrate, Table 1 presents the dataset Van Straten published in 1981, while Table 2 presents the data from Laios et al. in 2013. The latter only shows the reliefs for which more than 10 examples are present. Absent from this are: ears (5), fingers (3), eyes (3), hair (1), face (1), tongue (1), chest (male) (1), stomach (1), thigh (1). Indeed, since the same body-parts are most prominent, we can feel confident that the conclusion by Oberhelman is plausible. 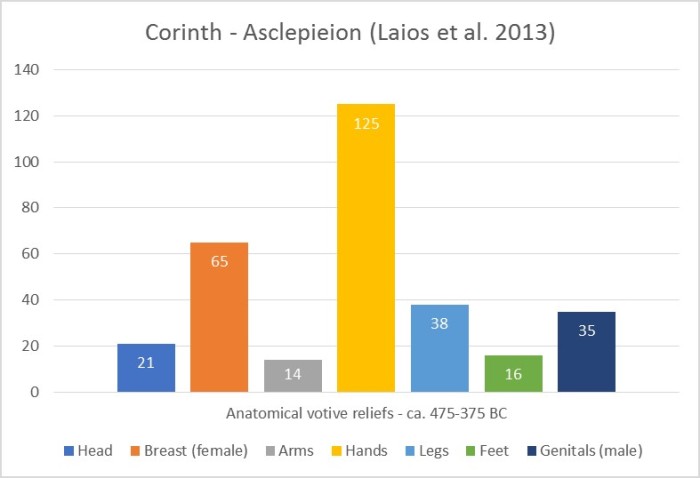 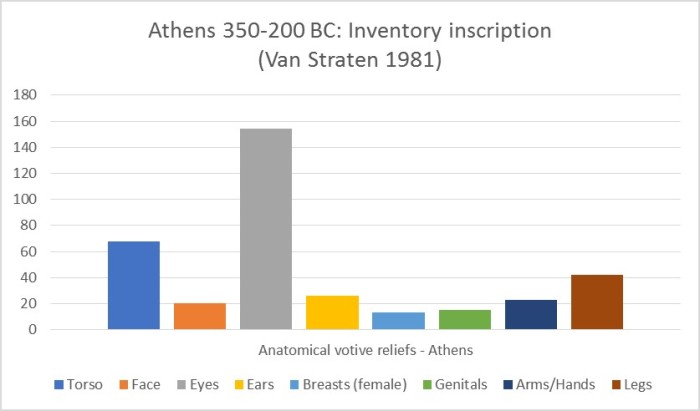 Table 3: Anatomical votive reliefs mentioned on the inventory inscription at the Asclepieion at Athens (c. 350-200 BC) as published by Van Straten (1981).

For eye-problems, I can indeed agree with the authors, but only during the period of c.350–200 BC. The female health problems are in my opinion over-interpreted. There are certainly some breasts present, and 29 out of the 68 torsos are female, yet I do not think there is sufficient evidence to suggest that female health problems were treated more than male health problems. On the contrary, when comparing male to female reliefs, the male reliefs (30) are not significantly less prominent than the female reliefs (42) if we also take into account that the total number of votive offerings consisted of 401 anatomical votive reliefs, mainly fabricated from gold and silver (Van Straten 1981, pp.108–9). For the periods before c.350 BC (5 reliefs of 5 different body parts) and after 200 BC (7 reliefs of 5 different body parts, none represented more than twice), there are simply not enough anatomical votive reliefs to either confirm or deny the evidence from the period between.

The above demonstrates that we do indeed have to be careful when interpreting anatomical votive reliefs as evidence for specialisation at these healing sanctuaries, and that, if we publish these sorts of studies, we have to take care to explain that we can only infer specialisation for certain periods of a site’s use.

Laios, K., Tsoucalas, G., Karamanou, M. and Androutsos, G., 2013. The Medical–Religious Practice of Votive Offerings and the Representation of a Unique Pathognomonic One Inside the Asclepieion of Corinth. Journal of Religious Health, 54, pp. 449–54.

One thought on “Anatomical votive reliefs as proof for specialisation at ancient Greek healing sanctuaries?”