Kristel Henquet is a research masters student in archaeology and ancient history at Free University Amsterdam/University of Amsterdam & Leiden University. She specialises in votive practices and religious landscapes in Southern Italy and in this post she shares some of the research she has recently conducted at the Royal Dutch Institute in Rome.

When I started my research on terracotta uteri votives I had read – on this blog, among other places – that some enclosed small clay features which were thought to present embryos and/or made a sound when shaken. I remained sceptical, thinking the sound could also be caused by little stones or sand that had ended up in the votive. Intrigued and open to the idea I found myself in the depots of the archaeological museum in Paestum, Campania, surrounded by hundreds of terracotta wombs, moving them (carefully!) up and down. After 222 uteri – not kidding – my patience was rewarded as the clattering of clay on clay sounded from the uterus in my hand. Some uteri later I found another one, now being able to clearly distinguish between the sound of one clay component in the one votive and two components in the other one. Among the more than 300 uteri I processed I found two examples which rattled (Figure 1). That is to say, apart from those, there were also crates of fragments which are unfortunately unable match the implicit criterium that a votive should be intact in order to know if it originally contained something. 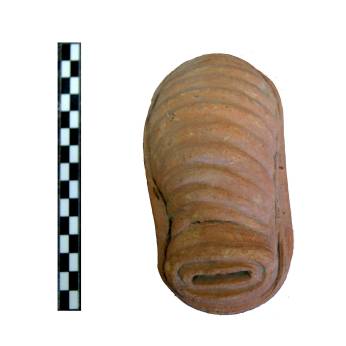 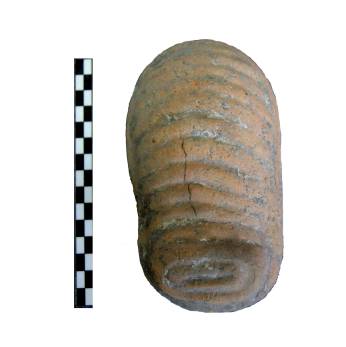 The phenomenon of rattles kept fascinating me and I started to think about the possibility of the terracotta votives indeed being used to make sounds, maybe during rituals or processions. It is not too hard to imagine a group of dedicants making their way to the sanctuary while one or few amongst them produce sound. As often with rituals, such practices often derive from older traditions and explanatory myths. An appropriate example in this case are the Thesmophoria: a festival in honour of Demeter, commemorating the search for her abducted daughter Persephone, which was widespread in the Greek world (including Magna Graecia) and was solely attended by women (Chaniotis 2011). According to tradition, during the annual festival the women sacrificed pigs, by throwing them into pits (megara). While going down in the megara to collect the remnants of the pigs, the women would make loud noises and clatter to scare away the serpents believed to be guarding the ditches. In this case the clattering – and rattling? – has in essence an apotropaic function. It is very possible that rattles given to children to play with served a twofold goal: to amuse the child’s senses and to ward off evil. Rattles could therefore be toys as well as ritual objects. 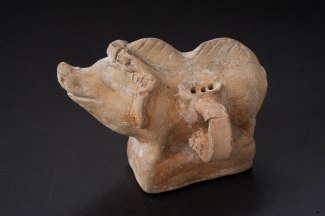 Strikingly enough among the few examples of terracotta rattles we find several pigs. They range from ‘Cypriot’ to ‘Roman’, but many are dated in the Hellenistic period. Their style and execution suggests that at least some of them were not (solely) toys. A terracotta boar from the John Hopkins Archaeological Museum is equipped with a rather broad handle to hold it (Figure 2). Of course only the find context could tell us whether we should place a rattling item in a religious, domestic or funerary context.

Regarding the last, most examples derive from Greece. In Italy, in the cemetery of Osteria dell’Osa near Gabii two rattles have been found in 9th century BCE tombs of female individuals, who presumably died at a young age (Bietti Sestieri 1992). Christopher Smith (1996) suggests that there could be some reference here to the women having died in childbirth. On the other hand he puts forth the possibility that the rattles were used in apotropaic rituals. Written sources attest early rituals including noisemaking, for example the boisterous dance tripudium, or the later Roman Lemuria festival in which noise could purify houses and drive demons out. Smith (1996) raises the idea that rattles could have had an important role in these early rituals, stressing the fact that they have been found in women’s graves and hence their pivotal role in ritual practices.

A cross-cultural parallel can be provided by the so-called Yakshas and Yakshis rattles from India, dating from the Shunga period (2nd – 1st century BCE) (Figure 3 left). The male and female semi-divine terracotta figures symbolise the earth and fertility and they are thought to be used to purify spaces during rituals. From the same period discus-like terracotta rattles with reliefs depicting dancers are known. Examples of these rattles are to be found in the Yale University Art Gallery and the Metropolitan Museum New York (Figure 3 right). The latter also houses an Egyptian faience Bes rattle from the Third Intermediate Period (945–664 BCE). Bes was known as protector of women and childbirth and it seems likely that the rattle was used in rituals addressing such concerns. He also played a role in the myth of ‘the Return of the Faraway Goddess’, welcoming the goddess Bastet, and therefore the return of good fortune, back in Egypt accompanying her in her advent together with musicians and dancers. It does not seem too far fetched to detect an overall anthropological and cross-cultural tendency of rattles being used in ritual processions and dances, in many cases connected to fertility and childbirth. 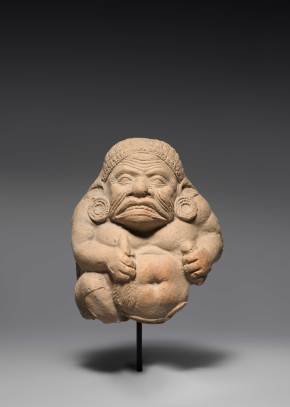 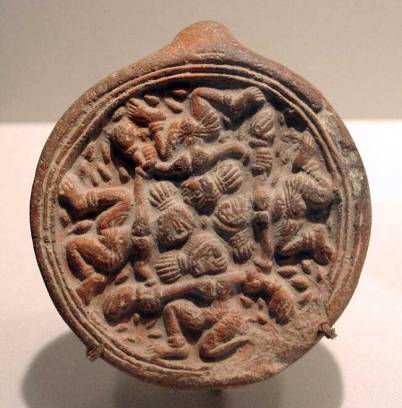 Back to the anatomical votives now: are there body parts besides the uteri that could be interpreted as rattles? The archaeological museum in Formello, just north of Rome, displays some of the votives from the deposits found at ancient Veii (Campetti and Portonaccio) (Vagnetti 1971) (Figure 4). Among them are four hearts, of which one is a rattle (second from the left), beautifully put in the spotlight in an audio-visual presentation called ‘the circle of life’, staging the rites of passages of a fictional Etruscan, framed by the sound of the rattling votive. Interestingly, only one out of the 348 hearts from the Campetti sanctuary turned out to be a rattle. 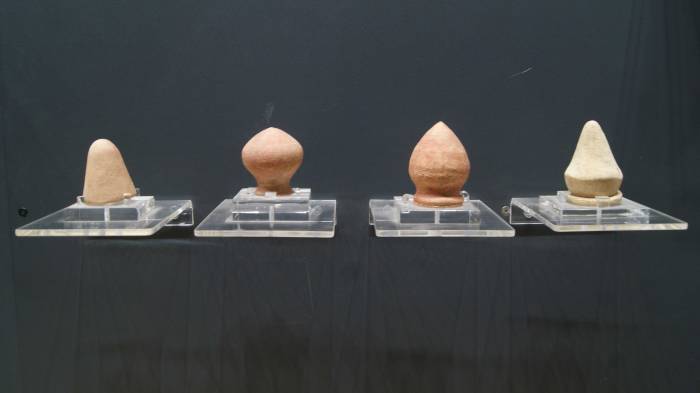 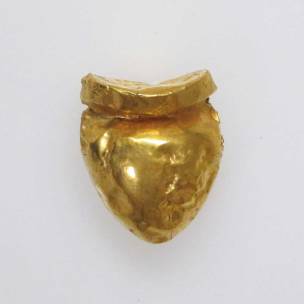 Now it must be said that there is some discussion about the attribution of these objects as hearts, as their appearance resembles funerary cones and they could also be interpreted as ‘just’ conical, piriform or onion-shaped terracotta votives. A parallel for this type of votive as a rattle, and even executed in gold (!) can be found at the Metropolitan Museum in New York, where it is presented as a heart (Figure 5).

It takes some imagination to discover what is inside an object, or at least consider the possibility that something might be there, invisible to the eye and inaudible to the ear. I do not say that all votives have been used as rattles, nor do I want this to be a plea to massively start shaking up and down and turning inside out museum objects, but it might move us to ask new questions about known material. It might encourage us to think about the event an object was part of or even played an active role in, about the person holding it, using it and finally letting go of it. The object can be a window to us, through which we can catch a glimpse of another world.

One issue remains: if the clay balls did indeed represent embryos, it is rather hard to unite this with the rattle theory. One cannot know for sure of course, but it seems a bit disrespectful to me to shake the womb, hurling the foetus against its uterine walls. However, if not the uteri, the general idea of rattling votives could be worthwhile to pursue.

2 thoughts on “Shake it till you make it: could votives have been used as rattles?”